MODERNIZATION OF THE THERMAL POWER PLANT 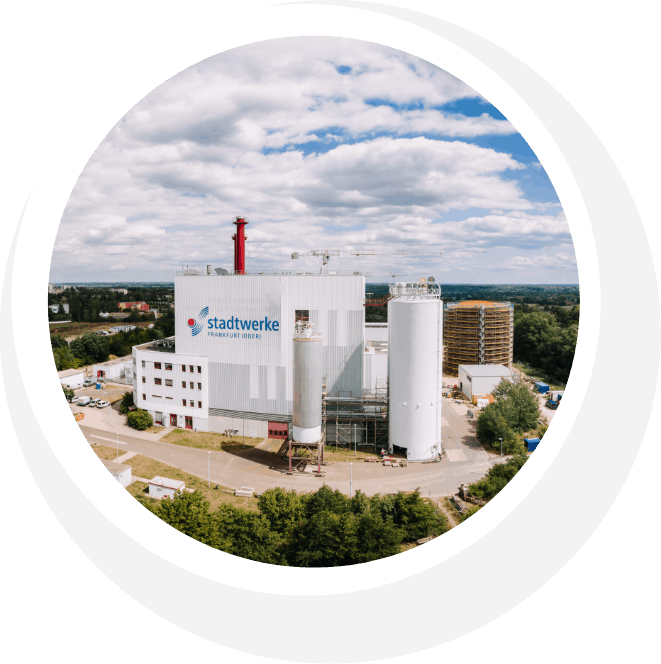 Since it went into operation in October 1997, the thermal power plant at Hohen Feld has supplied around 33,126 households and commercial customers with electricity and around 18,742 households and companies in the Oderstadt district. So far the power plant has been operated with pulverized lignite and natural gas. With the modernization of the power plant location, Stadtwerke is ensuring environmentally friendly and economical heat and power supply in our region. A 51 MW gas engine system enables the lignite power plant to be decommissioned. In the future, a heat storage system will significantly support the optimal operation of the Frankfurt generation plants. With the completion of the new plant, operations will be converted exclusively to more climate-friendly natural gas.

You can find more information about the modernization of the thermal power station in the construction journal.

TO THE CONSTRUCTION JOURNAL

THE POWER PLANT IN NUMBERS

Combined heat and power is the simultaneous generation of electrical power and useful heat. The advantage of this technology is the particularly high utilization of the energy stored in the fuel. Machines for power generation, which are used to drive generators, can only use around 30 … 40% of the energy due to physics. The rest is lost in traditional electricity generation. In these power plants, the loss is easily recognizable by the steam rising above the cooling towers. In the Frankfurt (Oder) thermal power plant, this energy is used to generate hot water and as district heating for heating apartments, offices and shops.

Only about 2/3 of the fuel is needed for the combined generation of heat and power compared with separate generation of electricity in a large power plant and heat in a separate lignite-fired power plant where about 65% of the energy is lost. This is also the case with a steam boiler, even if it runs on natural gas. This is why many experts see combined heat and power as an important component in reducing greenhouse gas (CO2) emissions in the future. With a new law to promote such systems (CHP law), the legislature has created an important prerequisite for the further expansion of combined heat and power and for district heating networks – as the basis of this technology. That is why we are also working harder to expand the heat supply in Frankfurt (Oder). The emission of CO2 in the Frankfurt (Oder) thermal plant averages only 440 g/kWh. In comparison, the average output of all German energy generation (2009) is around 620 g/kWh. A conventional lignite power plant even emits more than 1100 g/KWh. The Frankfurt (Oder) combined heat and power plant relieves the environment by 30,600 tons of CO2 annually. The amount of CO2 saved corresponds to the emissions of 13,116 Golf class cars (10,000 km/year mileage). In order to achieve the same CO2 saving effect, one would have to equip 345,000 m² – more than 48 soccer fields with solar cells, for example. (1000 kWh/m² and year of solar radiation, efficiency 15%).

When it comes to other pollutants, too, our thermal power station is ahead of the curve. Thanks to the modern burner technology, coupled with the flue gas desulferization and dust filter system, the emissions from the power plant are far below the legal limit values. For example, the emission of sulfur dioxide is only a third of the legal limit.

Around the clock, day after day, the combined heat and power plant, together with the top-of-the-range heating plant, generates heating water and electricity. This is only possible with the latest technology and a high degree of automation. But no technology works without people. In addition to our employees in the control room, a team consisting of mechanics and automation specialists ensures that wearing parts are changed in good time and faults rectified. Once a year the power plant is completely decommissioned and subjected to a comprehensive overhaul. A annual inspection of the safety technology by the TÜV also takes place. During this time, the Nord Heizwerk supplies our customers with district heating. Our employees plan the entire revision, procure the necessary replacement parts and commission specialist companies. In our chemical laboratory, important process values are constantly monitored and controlled, for example the purity of the water used in the water-steam cycle plays an important role in the service life of the boiler and turbines. Other focal points are the marketing of the electricity generated, for example on the Leipzig electricity exchange, the monitoring of compliance with official requirements and the management of energy supplies.

THE MODERNIZATION WORK IN PICTURES